↓ Skip to Main Content
Home › Coaching › What Are Your Foundational Core Values?

What Are Your Foundational Core Values? 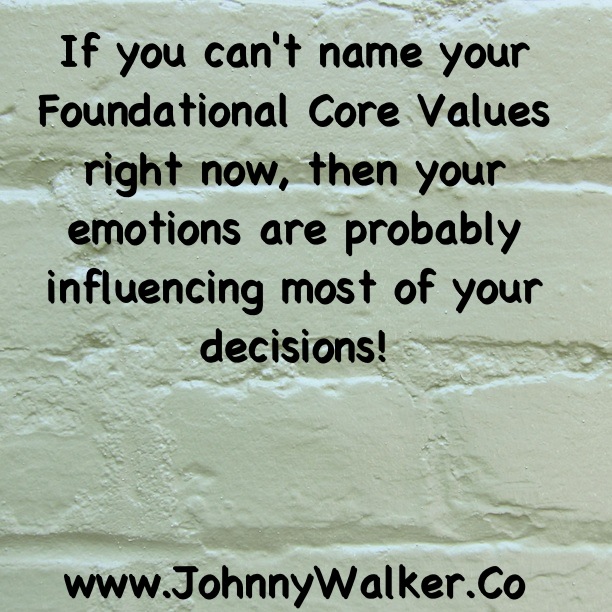 If I walked up to you and asked, “What are your Foundational Core Values?”  Would you know what to say?  I think if put on the spot and given a minute most people could come up with a few values that they agree with, but that is not what I am talking about.

I am talking about the Foundational Core Values that you base your life on.  They “why you do what you do” values.  The non-negotiable values that you would be willing to lose a job over before you give them up.

Most people can’t name theirs.  If you are in the most people category you need to pay close attention, because if you are unable to name your Foundational Core Values right now your emotions are probably influencing most of your decisions.

That is a big problem, because even though your feelings are very real, they are very seldom the truth.  Emotions are never a reliable source for decision making and, although fun to experience, should always be challenged.  Don’t believe me?  Try out this scenario:

Your sixteen year old daughter is going out on her first date.  The boy rings the doorbell and you invite him inside.  You sit the two of them on the couch and say, “Tonight is a very special night!  You two are going out on your first date.  Now, there are going to be a lot of emotions going on.  Confusing emotions, scary emotions, exciting emotions.  I want you to embrace these emotions and follow them until you satisfy each and every one!”

I don’t know you from Adam’s cat, but I am pretty sure there is not a single parent reading this that would look at those two teenagers and say that!  Even those of you who don’t have children understand how stupid it would be to tell them that!

Why?  Because emotions would send them down the wrong path.  Listening to and following those feelings would be hurtful and eventually destructive.

So, why is it that when you become an adult that suddenly your feelings become so trustworthy?  Truth is, they aren’t!

This is why knowing your Foundational Core Values is so important.  This isn’t an exercise that you do once and then suddenly everything is wonderful.  It’s a first step toward obtaining everything you have always wanted.  These aren’t the Foundational Core Values that other people say you need to have, these are the ones that you choose.  Once you identify them, things become a little bit easier.

My seventeen year old son went through the Discovering Your Foundational Core Values Exercise and a week later I asked him what he thought.  I gave him total freedom to give his input; I wanted to know if he thought is was useless or helpful.

He told me that since he discovered his Foundational Core Values he doesn’t care about what other people think.  He has now identified what is important to him (not what’s important Mommy and Daddy), and because of that he doesn’t feel the need to measure up as much.

Wow!  For a Dad, it doesn’t get any better than that!  Wouldn’t you like to have the clarity my seventeen year old has?  To be able to go out into the world knowing what is important to you, knowing what you won’t sacrifice, knowing what you are willing to go to the mat protecting?

Suddenly, eighty percent of his decisions are pre-made.  If any opportunity, good or bad, crosses his path he knows if it violates HIS Foundational Core Values the answer is “No way!”  His choices are no longer about getting in trouble with his parents or measuring up to his friends.  Now they can be about knowing what he wants and deciding if what is being offered is worth sacrificing who he is to have it.

I realize his journey isn’t over.  There are still the daily reminders of what his Foundational Core Values are, and the parenting I will be doing to help remind him.  Not to throw it in his face, but to remind him that he has an opportunity to use his freedom to plot his own course in life, and not allow others to plot it for him.

Knowing your foundational core values not only enables you to make better decisions, it’s the first step in discovering your purpose and puts you on the path for increased life satisfaction.

Stop sacrificing who you are for things that are of no true value.  Know who you are, and refuse to settle for less than what you know is worth your time and effort!

If any of you are interested in taking the first step in discovering your Foundational Core Values contact me at www.JohnnyWalker.Co, send me an e-mail requesting the exercise, and take the first step to intentionally living your life!

6 Comments on “What Are Your Foundational Core Values?”